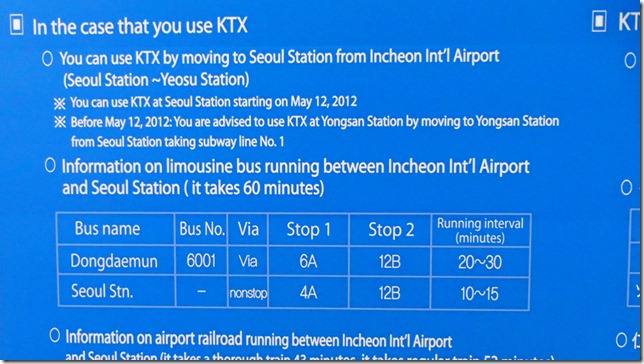 The night we left, the 2012 Korea travel team composed of Katsy, Anna, and Ron were all still rushing from work in order to leave all necessary instructions and make sure that all goes smoothly in their absence. Yes, we actually prepared work in our respective offices for our 1-week absence so that we get to enjoy our supposed work/vacation/work+vacation. It was our first time to do a web check-in because we wouldn’t have made it on time if we didn’t. Anna was still packing at the last minute while I just got home from a symposium thing with just enough minutes to change clothes, do a last minute check, print the web check-in thing, and leave. Ron, as always, was prepared ahead of time and was bugging both Anna and I to hurry up already.

Which of course we didn’t. Well, not much anyway. But just enough to make it. Haha.

We got to Korea safe and sound without actually knowing how to get to Yeosu. We arrived at Incheon International Airport and we just assumed that there will be signs everywhere of how to get to the Expo 2012 site. Thankfully, we found this:

Which would have been okay if their airport wasn’t big.. But since we were all hungry already, we decided to speed up the process by asking for help instead of wandering around. Thankfully, Ron got himself a “Young supporter” – a group of English-speaking Korean teens who helped out lost tourists like us in their search for the Yeosu Expo amongst other things.

She led us to the ticket stations and told us exactly where to go to take the KTX to Yeosu. Apparently, Yeosu was quite far from where we were and would take around 3-4 hours by their fastest train if I remember correctly. Anna and I lagged a bit behind as she experimented with her twin camera (she and Ron have twin cameras – a sign of destiny so to speak hahaha).

We finally reached the KTX to Yeosu but not after agreeing to standing room only for 2 of the 3 tickets. We just told ourselves that we’ll alternate for that lone seat. Apparently though, the seat was in another car while the two standing only tickets were in another! Panic ensued for us but thankfully there was a car that didn’t have its seats filled yet and we all got to sit. Haha. We were all tired and had to decide quickly because the train we got on was leaving in 3 minutes and the next train won’t leave for hours which will throw us off our entire itinerary (yeah, as if we had one!). We promised ourselves never again to agree on standing room only for a 3-4 hour train ride. But then, we’ll never really know. Sometimes it pays to suffer for a few hours to get to our destination.

There’s Ron looking out his window while Anna and I slept. Or at least I did. Haha. I think Anna also took pictures along the way.

We finally got to Yeosu and it was hot!!! It was seaside there so it was doubly hot compared to Seoul. After leaving our bags in the hotel, we walked along looking for food. It was already mid-afternoon and we haven’t eaten anything yet. Here’s our menu which we really didn’t understand and just ordered what they recommended.

Our first meal! Finally! After a long night and a long day of travel to Yeosu! Anna and Ron liked the meal. Me? I was happy I got to eat. Hunger tends to make me a bit cranky.

And yes, this post was rushed because I spent most of the day nursing my headache. It is thankfully a bit gone now so I’m back to working again. But not before rushing my 7th entry of the year and since I didn’t want to repost yet another entry about my iPad and how it made my life easy (yup, I have one such post that I didn’t publish online), I decided to finally start my Korea 2012 documentation. Admittedly, posting this late and trying to remember last August is not as effective as posting immediately after the trip. But then, not working for 8 days did have its trade-offs so back to work I went when I got back. Hopefully I’ll be more prompt with posting this year around. So let me sign off now as I don’t think I’m writing well tonight. 🙂 See you in a few minutes and maybe I’ll post my 8th post instead of waiting all day and rushing the last minute. But then again, I have work to do first. Or sleep. Yeah, maybe sleep.