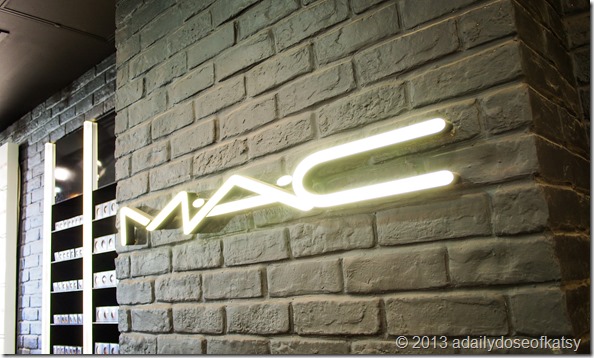 December 1 was World AIDS Day and MAC celebrated the event at Glorietta with the ever inspiring Bianca Gonzalez. Local celebrities, bloggers, and guests were all witnesses as MAC AIDS Fund donated P2,494,000 to the organization PAFTI, Positive Action Foundation Philippines Incorporated – The organization is devoted to contributing to the national response in advocacy, prevention, treatment, care and support for Filipinos living HIV.

I have known about MAC AIDS Fund since I started my love affair with MAC Cosmetics back in college. One of my first Lipglass in fact was Viva Glam V as I wanted to help support their mission – 100% of the sales for the Viva Glam line goes straight to supporting the fight against HIV/AIDS.

When Geolette invited me to join her at the event, I didn’t hesitate even though I was coming from a site meeting as MAC is one of those make-up brands that I really adore. I also wanted to see the original Viva Glam I which was described as an intense brownish blue-red and hopefully have the courage to try it out as I’m a bit scared of wearing red lipstick.

In honor of the event, I got my nails painted with MAC x Marilyn Monroe Nail Lacquer the night before. When I got to the event, they were giving everyone a chance to have a “LIP-over” and I just couldn’t pass it up.

Before the LIP-over wearing MAC Studio Fix Concealer and Liquid Foundation, Blush on cheeks, Eyeshadow on my brows, and Greyscale Liner on my lids.

After the LIP-over with Viva Glam I Lipstick and Engrave Liner.

My MAC Viva Glam I Lips and MAC x Marilyn Monroe Nail after a couple of hours.

Overall, I’m quite happy with Viva Glam I. I was scared to wear it at first but I went around Glorietta and I didn’t feel bothered by the fact that I’m wearing red lipstick. I really don’t want to draw attention to my lips as they are normally dry but the semi-matte finish of the Viva Glam I lasted me till after dinner. With every purchase helping out the MAC AIDS Fund, I look forward to collecting more of the Viva Glam line.