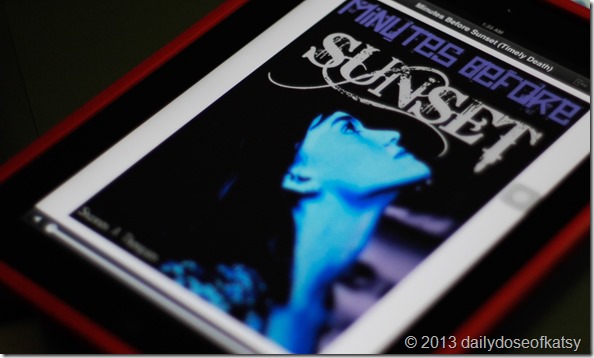 WordPress Reader is a wonderful thing. I chanced upon Shannon A. Thompson’s blog where she shares her journey as a writer to encourage fellow writers, readers, and dreamers.

A few months ago, she gave away 5 ebooks to her loyal readers (which of course included me as I am very much a frustrated writer and reading her blog inspires me to maybe, someday, write an actual novel and get published) in exchange for a few comments on the back cover of the paperback version of her book, Minutes Before Sunset. I gave my thoughts as I like commenting on blog posts and most times, I actually stop myself from commenting because I get shy since I don’t really know the people behind the blogs I follow. And yes, I was one of the five who won an ebook copy of Minutes Before Sunset. Yay for me!!

But this event was months ago! I won the book months ago! Minutes Before Sunset has been on the top of my TO-READ list ever since that day. And I finished (just) last week so this post is twice long overdue. To think I can read an entire book in one sitting. Maybe even three as I am quite fond of trilogies. BUT. I have been very busy to say the least. Even up to now. Even as I type this blog entry, I am taking out time from doing my long list of things to do as I have decided that I need to blog to keep my sanity and focus as I like writing for myself mostly, talking to myself mostly, as I type word after word of my posts.

But let me go back to Shannon’s wonderful book. Thanks to the Kindle app by Amazon, I was able to finish this book by reading it in practically every device available to me. Laptop, tablet, phablet, phone. It was my newly-acquired phablet that actually sealed the deal.

*may contain spoilers ahead*

The book was written from two povs – the main characters, Eric and Jessica. They are the human forms of Shoman, and well, Jessica who didn’t have another name.

Jessica’s chapter as seen in my Kindle for iPhone app.

Jessica was searching for herself. Eric seemingly has lost control of himself as he set on to fulfill the prophecy. But Shannon put in a plot twist (at this point, I’ve decided I don’t like spoilers so I wouldn’t really put any here) and well, I do recommend that you read her story instead of me spilling it all here. It is one of the Light and the Dark, where what is perceived to be isn’t really. The Light is the enemy here. The alternating views and worlds transitioned as easily as Eric becomes Shoman and vice versa. But Eric IS Shoman. And the first descendant. And well, Jess couldn’t have summed it up better.

My DTC phablet and Kindle notes

“All of a sudden, he was kind and – normal. But his eyes. His resonating stare fluttered through my memory, and I shivered. I hadn’t seen kindness in his pupils. I only saw intensity, and, I hated to admit it, but he was beyond intimidating. He was overwhelming.”

The book’s final twist left me wanting to read the next in the trilogy, Seconds Before Sunrise, which comes out this Fall. Until then, let me head on over to Shannon’s blog and continue reading her highly interesting (and inspiring!) posts.

2013 7/12 (On another note, I have decided to let go of my daily posts as it is simply not possible for me to post every day. But I will write. Most definitely.)