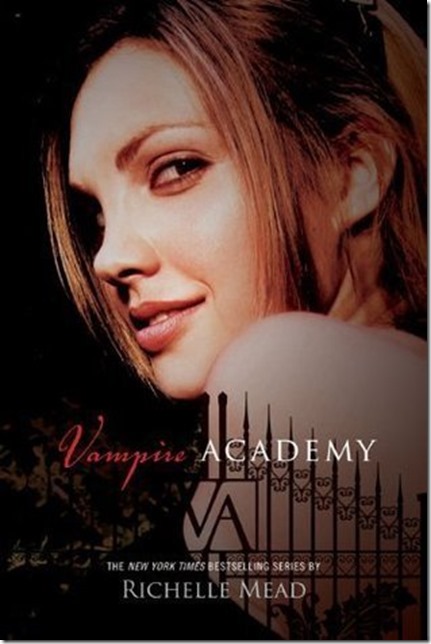 Before going any further, do note that this is a Done Reading Done Watching post which means that it is an ode to the written world of the Moroi, the Strigoi, and the Dhampirs, particularly Rose Hathaway and Dimitri Belikov, of which I have been an instantly converted fan. I am slightly embarrassed to admit to missing fictional characters from a series that I started to read with the goal of finishing before Vampire Academy the Movie was shown. I have several thoughts on the movie which I may (but most probably will not) write about in a separate post. The series though is an entirely different matter and I just have to write about it.

Spoilers ahead so read on only if you must.

I originally planned to finish just the first book before watching the movie. Unfortunately for me, and for work, exercise, outings, etc., I was hooked. I didn’t stop reading for three whole days until I finally finished all 6 in the series.

The first one, Vampire Academy, introduces the world of Vampires with two kinds – the Moroi which for matters of simplicity I will term as the good vampires and the Strigoi which are the bad ones. Dhampirs, particularly the male Dhampirs, are the half-Dhampir half-Moroi offspring that grow up to become guardians of the Moroi, particularly of the royal ones. For the female Dhampirs, there is that frowned upon option of becoming a blood whore but most of them don’t get much of a choice as they have to raise their Dhampir children that the Moroi men usually leave them with as they go on and wed Moroi women. There’s a really complicated little explanation on why Dhampirs cannot procreate with other Dhampirs which results in this dependency on the Moroi but it’s all in the book which I do recommend that you read. There is simply not enough explanation in the movie.

And so we focus on the novice guardian Rose Hathaway, a Dhampir that has a bond with Princess Vasilisa Dragomir, the last of the Dragomir line. The book starts with them getting dragged back to St. Vladimir’s Academy by the guardian Dimitri Belikov (and yes, there’s the love story folks for which I am a true sucker – vampire pun intended). With Dimitri tasked to whip Rose’s butt back into shape so she can be Lissa’s official guardian when they graduate, of course, they develop feelings for each other. Cliché? Yes I know but I loved every minute of their story. Haha. Fast forward to the equally fast-paced ending while introducing Lissa’s love interest Christian Ozera along the way together with some critical characters like Mia, Mason, Eddie, Queen Tatiana and so on. And there you have book one. It’s a great introductory book filled with open-ended scenarios that lead me to immediately turn the page of Book 2 in the middle of the night. As this is a YA series, first came the school issues, the next of course, involved the boys. Rose is torn between not two, but three. Yes, Frostbite’s summary doesn’t include the endearing Adrian Ivashkov when in fact he would play a crucial role later on. So much so that he is part of the spinoff series, Bloodlines, which I am yet to read. I’m still trying to delay the inevitable as the 5th book in that series is still set to be released later this year with the 6th book slated for next year and I don’t really like waiting. Contrary to what the back cover says, the second book is pivotal not in terms of Rose’s love life but in her career. Life changing moments were written here people. If the first book ended with a light open-ended feeling, the second will leave you a bit in shambles. I wouldn’t want to spoil the book for you but let me just tell you that you would want to read on to the next one just to know if Rose will ever be the same again.

And of course she is not. Not in Shadow Kiss. Never after Shadow Kiss. If Frostbite left you down in the drain, the third book will lift you up in a surreal cloud of hope only to drag you back down again, fast and straight past the drain and direct to the sewer where you will roll around in despair thinking, wishing, and figuring out ways to right the wrong that has never been done. But that’s just me getting ahead of myself because I did pay a lot of attention to the little clues in the book and by this time, I knew and believed that shadow kissed Rose will prevail. I actually paused reading for a bit of time here until I figured out what they needed to do next. Of course, Spirit, the fifth element. Kind of reminds me of how they used to call on Captain Planet – earth, wind, fire, water, heart! Cue excessive writing here and a slight hesitation before continuing as this might not even be a review at all but more like a documentation of my feelings for the entire duration of my reading. Yes, I do think my Done Reading posts are exactly that – I am hoping to review these books and share with you guys how I felt reading them and maybe you’d be inspired to read them yourselves. Or maybe not.

What would you do if the love of your life died but did not really? What if he’s stuck in this torturous limbo that he’s not even aware of? Do you go and hunt him down to kill him? Or do you end up in his arms once again, torn between freeing him or staying with him even though you know it’s not really him anymore? I give you guys THE ULTIMATE SPOILER OF ALL – DIMITRI IS A STRIGOI. And he goes and captures Rose (who looks for him really she was asking for it) and entices her to become Strigoi herself. Oh the torture, the temptation, the moral dilemma. I’m turning overly dramatic here but in the end, Rose stands her ground, kills Dimitri in one epic battle that I’m not sure I even read well enough to imagine, and heads home to St. Vladimir’s in order to graduate with Lissa and the rest of the gang. But of course she didn’t really get to kill him. She just thought she did and now he sends her a love letter telling her he’s coming for her. Romantic much? Not really when he’s after her death. She refused him and now she must die. How Romeo and Juliet of him except that he’s actually Strigoi so technically he lives while he aims to kill Rose with a stake through her heart and leave her dead, as in the really not living kind of dead. On to Book 5!!

Spirit Bound. Bow. Here’s where Adrian Ivashkov starts to shine. But what does Rose do? Does she appreciate Adrian and all his help and affection? No she does not. (Well, she did actually up until the last book where of course the real epic love team had to be brought back together.) What does she do then? She stalks after her ex-love, Dimitri! She even gets the precious Princess Vasilisa on her wild goose chase but apparently it wasn’t entirely futile and here’s THE OTHER ULTIMATE SPOILER OF ALL – DIMITRI IS NO LONGER A STRIGOI!!! What?? Wait?!? Now how did that happen????? Spirit people really. And go read the book. I’ve been undermining the power of friendship here but I have to admit that this series is as much about Lissa’s and Rose’s friendship as it was about Rose’s and Dimitri’s love. The strength of their bond goes beyond Rose’s ability to slip into Lissa’s mind. They really are best friends and until the end (Book 6), this strong friendship shows. It was actually Lissa who brought Dimitri back by risking her life. Mind you, the Moroi royals are not built for fighting and yet Lissa managed with the help of her fire churning on and off again boyfriend Christian to overcome one of the strongest guardians the Dhampirs have ever seen. And becoming Strigoi just makes you 100x (okay exag much Katsy) more powerful. Talk about power of friendship and insanity maybe.

Whew. Last Sacrifice. I’m tired now. I don’t know where to begin anymore. Rose was accused of killing the Queen in the last book (wow I actually left that part out there did I?) and her friends broke her from jail. She just had to get stuck with Dimitri who after turning back into a Dhampir claimed that he didn’t love Rose anymore. I call it claimed because really? You think you’d fool me? Yup, I have this type of conversation in my head all day. Now Lissa is in running to be the next Queen and so off they save the day and wow this last book really tied up all the loose ends. At least in this series because there is a spinoff after all. Richelle Mead brought all her characters to play in one epic conclusion. The sacrifice was Rose’s of course. Read the book. I implore you. Haha.

Now let me wrap it up as I’m sure reading through my words might just make you want to kill me for spoiling so much with so little. I didn’t give away the ultimate ending now did I? I leave that up to you. Overall, I love this series. I literally missed the characters after and I was sad when I finished because it was like being a part of their world and then suddenly I was not. I knew I got a bit obsessive reading through 6 books in so short a time and practically forgetting to do any other stuff unless those that I really couldn’t miss like say, breathing. Or say eating. Even sleeping was optional. The bottom line is you may think that it is just another one of those vampire novels but really it’s not. There’s everything epic here in as far as YA lit is concerned. I am admittedly partial to anything dystopian or anything with a strong female lead but do read this series if you’re into those as well. Before watching the movie if you can but if you have watched the movie, do read the books. The Vampire Academy Series in novel form contains so much more. Not to mention the Graphic Novel editions which would be equally cool to read.

*All photos of the book covers from http://www.goodreads.com