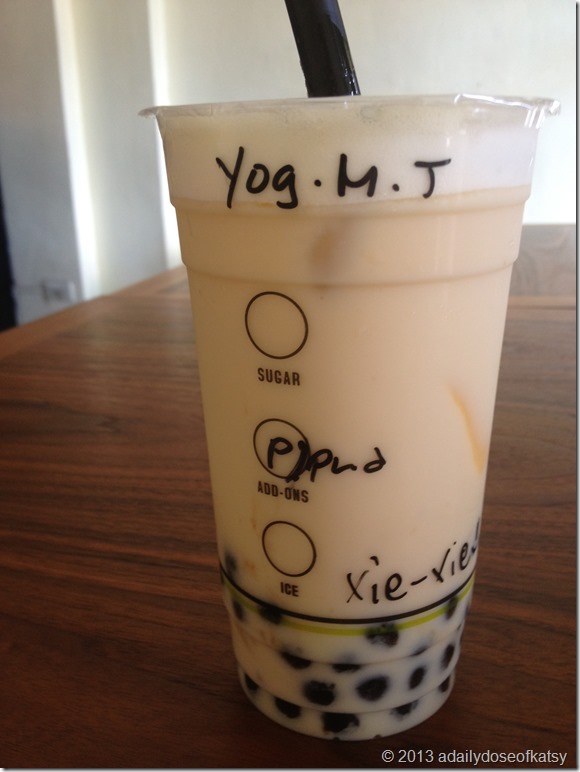 In this super delayed post of our celebration last February 10 (which was well, Chinese New Year), I’ll basically be posting my phone photos from the instant get-together with my bestest college friends Ariel and Mark.

As with all instant get-togethers, it all started with Ariel calling on his last day (yet again haha) here in Manila for us to celebrate his being here with some good old food fest. Since I practically don’t go out anymore (the last movie I watched on the big screen was Twilight. Seriously.), I decided to indulge in this age-old tradition of ours.

What should have started with ice cream at the Iscreamist (?), became a Moonleaf milk tea merienda. Iscreamist was sadly closed that day and we mourned with a large order of milk tea at the Moonleaf just a few doors down.

Moonleaf’s Yoghurt Milk Tea is still one of the best with extra servings of pearls! Xie xie!

Since it was still too early to eat Bulalo, we decided to use our soon-to-be expiring MRT cards (wow rare times indeed!) and headed over to Bonifacio Global City to bug Mark as he gleefully endorsed the Art Month (at least I think that is what it was called) which his company is a part of. #ARTBGC2013 #bespoke

Ariel took part of this doodle wall haha. His is the doodle of a woman (?) at the top center of the second photo.

We were also treated to a Chinese Dragons’ Parade which I sadly could not capture with my phone. Mark literally ran to the staging area at this point to maximize his brand new Olympus OMD camera. Which left us shocked of course as Mark practically never runs. Seriously does he even move??? Hahaha.

We walked around some more to this beautiful piece of art that Mark’s company, Bespoke, made. I forgot the name of the artist though.

It was really pretty up close with its colorful and moving parts that kids have started to poke through at the time.

Now most people who really know me know that I have an unhealthy obsession with Bulalo. We were supposed to head back to Timog area for this amazing Bulalo Ariel and I discovered in one of these food galore trips but Mark convinced us to try out Aracama which was just near the artwork above. He promised us the presence of Bulalo in the restaurant even if he’d never actually eaten there and was just banking on the presence of Bulalo practically everywhere. Haha.

Simply put, Aracama was great – the atmosphere, the design, the details, and most especially, the food. I never thought I’d love malunggay as a dip so much. I couldn’t remember the names of what we ate but of course, there was Bulalo.

Now I want our patis, sili, and calamansi at home to be served like this. Haha.

Now the night didn’t end there as it was rare that Mark brings a car plus Ariel almost always wants to go to a Videoke place. Haha Mark can drive pala! We never believed him! He swerved plenty of times though! Hahaha. Good thing I was in the backseat as always where I can take a quick nap while they navigate the thankfully light Sunday traffic. But who can sleep while Mark swerved the car left and right?? Really???? You call that driving????????

Finally, we got to our destination – Centerstage!

Their tagline – the best party deals on the planet! And Ariel being the ultimate Videoke hunter highly agrees with this. Look at the prices below and believe! Haha.

And after 4 hours of non-stop singing (and since it was just us three, that meant we each sang for more than an hour??), we finally called it a night.

So the food and videoke fest will resume the next time that Ariel decides to come back to Manila for a visit. Which will most probably be soon as he’s like here practically every other month with all his events. Wow artista lang ang peg?? Haha.