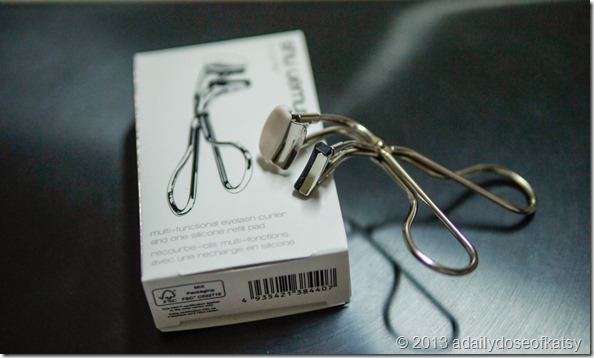 As promised, here is my review for the Shu Uemura S-curler.

I got introduced to the S-curler way back in August when I attended Shu Uemura’s Ultimate Eye Opening Experience Beauty Workshop. It was my first time to attend such and I was really happy because I learned quite a few makeup tricks from MUA Joyce Platon. She patiently answered our questions after her demonstration and I found her genuinely nice all throughout. I even took down notes which hopefully I’ll be able to share here one of these days. (But there’s just soooo much to write about, I don’t know where to start haha…)

So back to the S-curler. At first I thought that it was just a nifty little version of Shu’s famous Eyelash Curler but I soon found out that it had a few tricks up its tiny sleeve. The “S” stood for the eight essentials considered in the making of the tool, one of which was sidebar-free. Considering that my first ever lash curler looked similar to the S-curler, I was intrigued.

I asked the MUA at the Shu Uemura counter for his suggestion on which should I buy if I were to purchase just one. He told me that the classic and the S-curler are different and while it seems that the S-curler is really travel-friendly and easier to use than the classic, he ultimately advised me to go for the classic.

I, as I tend to do when advised, purchased the S-curler. As happy as I am with my purchase, I realized later on after a couple of months of usage, that the MUA was right. (LOL, duh Katsy.) His reasons for recommending the classic then was that the S-curler may look like the more portable one (not to mention it’s the latest) but when it comes to curling and going, the classic can’t be beat. It’s just one press of the curler and you’re done, you’re out the door. (Yeah well not really, there’s still mascara, and a couple more presses and yes, the lips to be done. I tend to do my lips last or not at all.)

BUT. I did have a reason for getting the S-curler instead of the classic regardless of his advice. (See, I’m not really that hardheaded.) I still had my Banila Co. which was barely a year in my possession. That was how I convinced myself that I’m getting the best of both worlds. The quick curling fix from my Banila Co. Eyelash Curler with the Shu Uemura S-curler going in for some serious spot curling.

Here’s my Banila Co. one for those who have not seen my previous post. I shall use this one to compare with the S-curler.

Now on to some before and after pictures. The effectivity of these curlers are better judged with proof.

The photo above and below shows my lashes before curling.

Now this next one, I used the Banila Co. Eyelash Curler for some quick all-over curling.

The lashes on my left eye (photo below) shows that my lashes have now been curled but the side view of which (photo above) shows that the curl has a slight sharp angle to it.

Now the photo below shows the lashes on my right eye to have a somewhat smoother curl. (That’s how I can describe it in person, I’m not sure if this particular photo translates it as clearly.) I used the Shu Uemura S-curler for this one so that I can compare the effect of the two. I wonder now what the effect would be if I used the classic Shu Uemura Eyelash Curler….. Hmmmm… (No buying!)

And the finished product, lashes on the left curled with Banila Co. while the lashes on the right curled with Shu Uemura S-Curler. The left one shows a more angled curl while the right one shows a rounder, softer curl. For me the S-curler wins the better curl award but since it takes more time to use (particularly due to its size), I find myself reaching for my Banila Co. one more. Using them together though makes for the best curl effect.

Final thoughts on the Shu Uemura S-curler (for now): If you were to purchase just one eyelash curler, I would give you the same advice the MUA gave me, go for the Shu Uemura Classic Eyelash Curler. It has been awarded plenty of times and since everyone’s practically in a rush most days these days, the classic beats the S. But if you’re kinda obsessed with getting the perfect curl and have a bit of spare time, go for the S-curler. It definitely reaches those hard to curl lashes that are small and at the corner of your eyes. Use together for best results if you have the luxury of owning the two as these are on the pricier range of eyelash curlers with both around P1,000 at your favorite Shu Uemura counters.

Be Like Jackie Chan with these Items You Can Check out at Shopee’s 9.9 Super Shopping Day