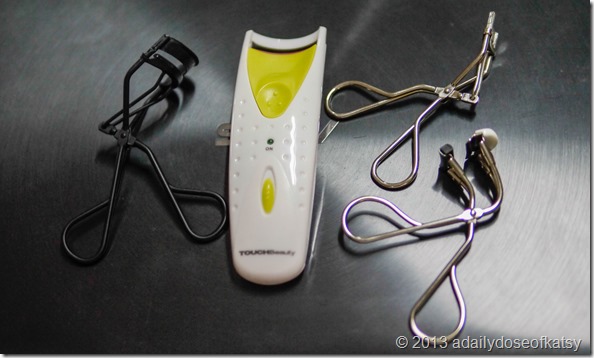 I realized after doing an inventory of my makeup and tools in the hopes of preventing future purchases (I didn’t succeed really, I just ended up figuring out my lacks thereof), that I tend to collect certain fascinations of mine at the time.

First up – my LASH CURLERS.

I was never really an eyelash-curler-and-mascara girl, I was more of a pile-on-the-eyeliner-and-let-it-smudge-hopefully-prettily girl. I have been wearing contact lenses since high school and using mascara tended to irritate my eyes. I was still clueless then and didn’t know the power of waterproof mascara and a good eyelash curler. I only decided to pursue these little objects when once in a cab on the way to a mall with one of my best friends, she whipped out her eyelash curler and started curling her lashes. (The traffic was slightly heavy so don’t worry, she didn’t hurt herself) I was utterly fascinated. Why in the world would she take the time to curl her lashes??? Did it really matter??

And so I researched… And Google being my friend, along with the numerous magazines I consume on a monthly basis, told me that curling your eyelashes instantly gives you that wide-eyed, pretty girl look. Batting your eyelashes was worth zilch if they weren’t curled, lengthened, darkened, and volumized. (A shoutout to the falsies that I still have never tried in my entire life!)

And so I purchased….. But not the Shu Uemura or the Shiseido one which according to the world wide over were the industry standards. They were far out off my budget then. Silly little me didn’t even go for the standard-sized one that curls all your lashes in one squeeze. Instead, I got this.

Voila! The smallest, cheapest eyelash curler I could possibly find inside Ever Commonwealth’s Department Treasure Store. I was scared to buy a full-sized one! I thought that if the big ones pinch me because I was curling wrong, that it would hurt me and I’d end up with my eyelids bleeding. So I opted to take it slow, one small section at a time.

So… Did it work? It did actually curl, a bit, but they weren’t these nice curls that I kept seeing all over those glossy pages. And that made me decide then that curling my eyelashes was a step I wasn’t willing to add on to my forever rushing routine.

BUT. That was then.

Fast forward to the year 2012. (Yup, just last year, I know, I’m really sloooooow to take on the whole curl your lashes commandment.) The lovely little shops of makeup in Myeong dong, South Korea, held me bewitched and I splurged quite a bit in this particular one called Banila Co.

I finally got myself this black full-sized one that came in a lovely clear pouch and an extra pad! I was ecstatic! I was finally going to do the whole curl your lashes in the morning routine! Which in reality lasted all of approximately 5 mornings save for those times when I am in the mood to experiment with makeup or there is an event I had to go to. I know I still suck. I most probably simply didn’t know how to use it.

I practically gave up on curling but I was suddenly becoming aware of the huge difference caused by eyelash extensions, false eyelashes, and lash perming. I came this close to spending on Browhaus for their Lash Curl-up service but I still haven’t taken the plunge. Instead, I fooled myself into thinking that I can recreate that beautiful curl with this.

A heated battery-operated lash curler! I was ecstatic once again! My stick straight lashes actually curled quite nicely! I kept using this heated curler as long as time permitted but I suddenly woke up one morning a teeny bit scared that it would explode while I was curling my lashes. It was so cheap it had to be faulty. I know I was wrongly justifying things but I was heading towards Shu Uemura territory right about then. I HAD TO TRY THE GOLD STANDARD.

Sadly, the gold LE Shu Uemura curler wasn’t available when I decided to purchase. Plus, I was also trying to be thrifty and couldn’t justify buying a full-sized curler even if it was a declared must-have by so many when I have my black Banila Co one that I rarely used.

Thankfully, it was right about that time that this little baby was born – the Shu Uemura S-Curler. It ended up the final addition (as of this writing) to my mini-collection. Is it really worth it? Or is it just a baby-sized curler for scared little newbies like me who doesn’t know what to do with the original one? Quite the contrary really. But this I will explain in my next review….