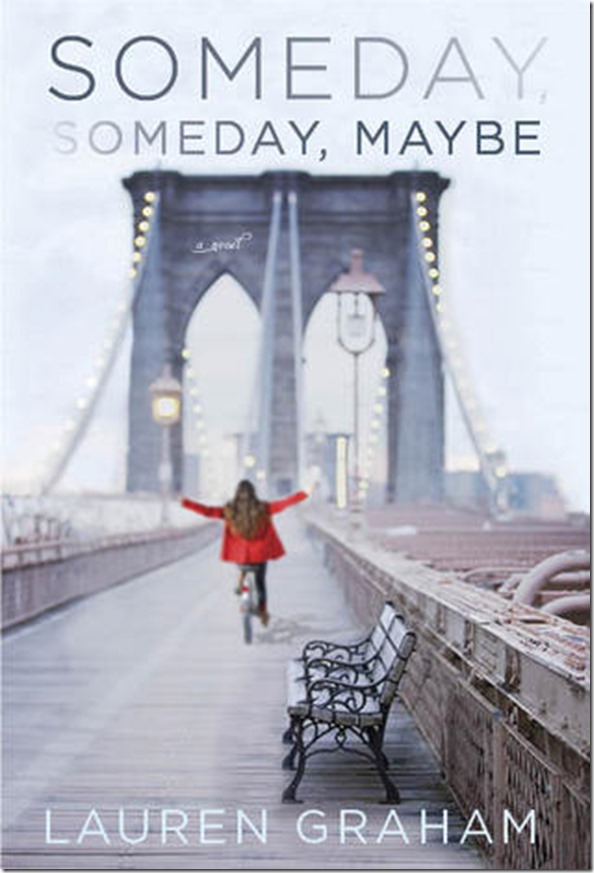 To say that I love The Gilmore Girls is an understatement. Well, I don’t think I can say anything more than that really. The show is right up there with my top “old-school” favorites – The OC and One Tree Hill. I know I have plenty more, HIMYM, Hart of Dixie, and Dollhouse are just a few others that come to mind. Anyway, when I read that the actress who played Lorelai Gilmore wrote a novel, Someday, Someday, Maybe, I knew I had to read it. I also want a signed book from Lauren so universe if you can hear me? Please? Haha. Lorelai is one of those cool TV people I’ve come to really love. Right up there with Summer Roberts/Rachel Bilson. Anyway again, on to the mini-review.

Lauren Graham wrote quite a compelling and light-hearted story about a struggling actress in New York City who sets a deadline for herself as she pursues her dream. Franny is funny and an easy heroine to love. You somehow understand her dilemmas and the Filofax thing is hilarious to say the least. I personally see my own planner in those pages filled with random doodles, resolutions, and plenty of that everyday life complications that at the moment feel too much to carry but after some time has a certain accomplishment ring to it by simply getting through. Haha, I don’t know if I managed to expound on that thought clearly. But really, if you’re looking for a feel good story, something that’s easy to read and would have you rooting for Franny and Dan to get together in the end (Yeah some pseudo spoiler going on here but I won’t spill.), then this is it.

I breezed through reading it over just a few hours and found Lauren’s words entertaining – they sort of remind me of the good old Gilmore Girls banter that I loved and miss. Maybe if you hang around conversation like that for a couple of years, it rubs off you. It may seem cliché-ish at times with an actress writing about being an actress but it is never like that throughout the book. If I have to give this stars, I would give this 5 out of 5. 4.5 for the actual rating with the extra .5 for being Lorelai. Overall, this New York Times Bestseller debut novel is all Lauren and I’m looking forward to more of her writing. It never felt drawn out and I was flipping page after page.

That ending!!! I do hope Lauren writes a sequel but in my online research, there’s no mention of it. BUT! Someday, Someday, Maybe just may be showing on your TV soon after being picked up by the CW and Ellen DeGeneres’ production company. Now that would be cool to watch if only Rachel Bilson isn’t already on Hart of Dixie. (Yeah, I’m basically casting her everywhere I can. That moment when Rachel appeared on Gossip Girl’s series finale = swoon and major fandom!)

Bye for now! Hopefully I’ll get to write about my Beauty Purge (to) vs Splurge 2014 next.