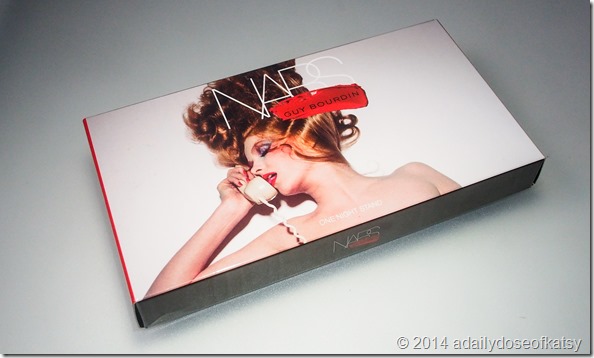 I’ve been wanting to try Nars for a while now but I honestly didn’t know where to start. I kept reading so much about their products and almost all reviews were glowing. When I finally decided that the blushes would be a good bet to break my beginner status, the Nars Orgasm blush after all has a cult following, the Nars Guy Bourdin Collection came out for Holiday 2013 with this palette.

The One Night Stand Blush Palette.

Cue night after night of “I want that, I need that..” and all other forms of longing after I first saw the preview shots online. I researched and researched on when and where to get it and set up everything in order and placed it in my cart the moment I had the chance. Sephora’s Friends and Family sale was even ongoing then. But in a bout of “I really need to save more and not buy makeup.”, I didn’t checkout.

Cut to the day when I finally decided that I WILL GET THE ONE NIGHT STAND PALETTE. It didn’t happen overnight honestly. I almost passed up on it and was determined to get the other two Nars Blush Palettes available at Nordstrom – the Spendor in the Grass and Adult Content which somehow cost less. But I had the privilege of seeing the palette in person and when it was actually used on me, I knew the moment that I get on a computer (or my phone really with stable net connection), that baby was mine.

It was not available at Sephora anymore so I searched through my Instagram feed filled with local makeup resellers and finally found the One Night Stand at Makeup Pro. I practically filled up the form in a frenzy as I didn’t want to lose out on it or else I know I’ll be faced with days of moping around and not accomplishing plenty. Yeah, I admit I can get crazy obsessive at times. LOL.

I had it since before the New Year. I only used it last night though (to go on errands even!) because I didn’t want to break its pedestal status any sooner but it was getting to the point that I had to know – Was it worth my weeks of semi-crazy obsession? Was it worth the deal I made to write at least 5 posts before I purchase it but ended up writing a month and a half’s worth? (This one was worth it as it coincided with the NABLOPOMO and I had tons of fun churning out post after post every single day for as long as it lasted before exhaustion finally caught up with me and I went on a semi-blogging hiatus over the holidays.)

And the answer is….. I would like to say a resounding yes but I am honestly still undecided. I know that I did save some money getting the palette version instead of the individual ones plus I was able to score 3 palette specific shades that are not available on the permanent line. I also got Orgasm, Deep Throat, and Laguna, all three shades of which are perennial best sellers of Nars. But I guess with all the over-hyping I did plus that lost savings when I delayed instead of getting it through the Sephora F&F sale, I sort of expected magic and fireworks and instantaneous, cover worthy cheeks. I know I also get carried away but there’s always super plus points to be gained with positive thinking, but too much expectation just might let you down even when you aren’t really.

This palette though, I don’t think it let me down. Here are the super quick swatches I did (Devotee, Laguna, Deep Throat, Mistinguette, Orgasm, Goulue).

Laguna almost didn’t appear on me but Goulue and Mistinguette (my personal blush representative of Desire which I’ve been wanting to get as well) are quite interesting, not that I would try to use them both at the same time, but who knows maybe. Orgasm and Deep Throat I absolutely love and Devotee can suffice for now instead of me going out to get Albatross for my highlighter.

Here I am with a photo step by step applying Orgasm – Laguna – Devotee for that blush – bronzer – highlighter combo. Do you see the difference? I think the effect is ever so subtle which I kinda like for everyday. Orgasm just makes you glowy and I initially thought that the shimmer would be too much but I don’t think it is. I did try this out at night so I still have to check it during the daytime.

With a quick swipe of color on my lips to “finish” off the look. At this point in time, I realized I had to learn to do my hair as well and not just my face.

So was it worth it? Just a few paragraphs after and a couple of photo cropping, now I’m saying YES!

The Nars Guy Bourdin One Night Stand Palette is a great intro palette if you’re looking to try the Nars Blushes whose certain shades have reached HG status with their users. The Orgasm blush alone came highly recommended by those fabulous people I have been fortunate to encounter personally. I think this is the start of my love affair with Nars Cosmetics.

Nars Spring 2014 High Seize Collection – I’ve got my eye on you next!