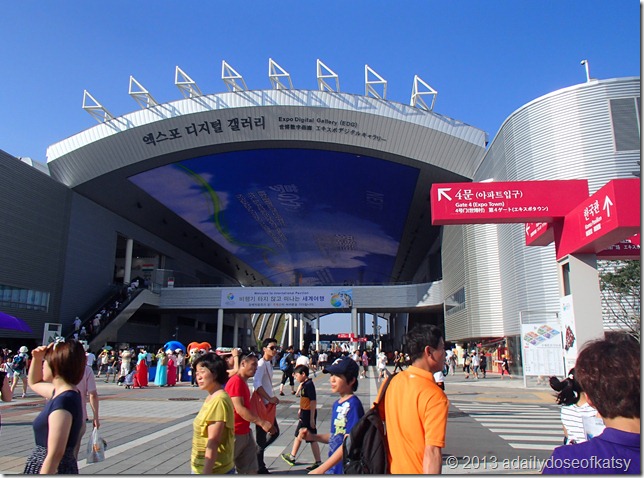 So instead of rushing later today to finish Day 1 of my Reliving Korea 2012 series (hopefully I will get to finish this series), I decided to write now instead of later. I know I wouldn’t be able to wake up by 5 anyway if I sleep now so might as well put the time to good use. I did sleep practically the entire day yesterday because of my headache so I should have had enough sleep for now. I’ll be forced to go back to a normal sleep routine soon anyway.

We got tickets that same afternoon to visit the Yeosu Expo 2012 so that we can gauge and maximize our 3-day stay in Yeosu as we were supposed to head back to Seoul on the fourth day. Let’s try to relive the rest of the day in pictures.

This is the first pavilion you will see near the entrance (or at least, where we entered): From there you can see the Yeosu mascots, Yeony and Suny:

The theme of the 2012 Yeosu Expo was “The Living Ocean and Coast” which can be seen all throughout the different pavilions as well as this huge screen that spanned the entire ceiling of the International Pavilions (or the Expo Digital Gallery main hall, I’m not really sure what it was called):

From certain vantage points, you can also see the vastness of the Expo site: We were a bit tired that first day from the non-stop travelling but we did visit quite a few of the pavilions. My personal favorites were France (as with the 2010 Shanghai Expo) and Philippines.

The France pavilion showcased the ocean theme with mirrors. I really loved the concept. I wish I could read about their concept… But since I couldn’t, I used it as background to a pseudo-mirror shot of myself. Haha. I do hope I get to visit these landmarks in person and not submerged in a water tank.

They even had swinging robots..

and butterflies in the ceiling.

Hmm… I think I should post the continuation of this continuation tomorrow. There’s still a few photos left (the award-winning Philippine pavilion and some Ron+Anna photos, apparently I have a few) and this post has turned out to be quite picture-heavy already. Okay, tomorrow then! I’m off to get ready for a long day of work… Zzzzzzzz…